To share your memory on the wall of Donald March, sign in using one of the following options:

Print
Donald James March, age 97, of Stevens Point, passed away peacefully Saturday evening, October 31, 2020 at the home of his daughter and son-in-law while under the care of Ascension Hospice.

A private memorial will be held, with burial at... Read More
Donald James March, age 97, of Stevens Point, passed away peacefully Saturday evening, October 31, 2020 at the home of his daughter and son-in-law while under the care of Ascension Hospice.

A private memorial will be held, with burial at Prairie Home Cemetery in Waukesha, WI.

Donald was born December 17, 1922 in Sheldon, WI, the son of Daniel James March and Estelle Iva Moore. He graduated from Tony High School in May 1940. In December 1942, he was drafted into the army and on January 27, 1943, he was called to active service. He was a sergeant and served with the 331st Replacement Company until his honorable discharge on December 26, 1945.

He married Lucille Sophia LaRose on November 21, 1949 in Milwaukee, WI. The couple settled in Pewaukee where they raised their two children. Donald was a machinist and worked for National Service Tools in Milwaukee until 1963 when he started his own company March Tool and Manufacturing Corporation which he operated until his retirement in 1982. During that time they manufactured precision parts for a broad variety of clients, from tractor components for Allis-Chalmers to fuel cell plates for NASA during the Gemini and Apollo programs. He was also a pioneer in the development of titanium prosthesis for human use.

In 1985 Donald and Lucille moved to Waukesha. Then in 2004 they moved to Stevens Point to be closer to their daughter and grandchildren.

Donald enjoyed fishing and woodworking and was a long-time Green Bay Packer fan having had season tickets since the 1960's.

Donald is survived by his two children, Gary March, Chicago, and LuAnn (Jack) Elsinger, Stevens Point; two grandchildren Robin (Joel) Falk, and Daniel (Kayde) Elsinger; and three great grandchildren Nathaniel Elsinger, Gianna Falk, and Genevieve Falk. He was preceded in death by his wife Lucille of 67 years, his parents, and by his sisters Lucille March and Lorraine Burke.

The family would like to thank Ascension Hospice for their care of Donald especially Patty, Donna, Mary, Megan, Stephanie, and Kathy.

We encourage you to share your most beloved memories of Donald here, so that the family and other loved ones can always see it. You can upload cherished photographs, or share your favorite stories, and can even comment on those shared by others.

Plant a Tree in Memory of Donald
Plant a tree 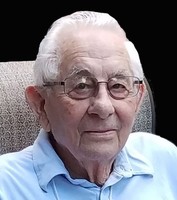