To share your memory on the wall of Gregory Kulas, sign in using one of the following options:

Print
Gregory S Kulas Sr., 83, passed away peacefully on January 14, 2021 surrounded by his family. Greg was born June 25, 1937 in Milwaukee, WI to Stanley and Margaret P (Ciecholinski) Kulas. He attended St Anthony’s Elementary School until 1948 when ... Read More
Gregory S Kulas Sr., 83, passed away peacefully on January 14, 2021 surrounded by his family. Greg was born June 25, 1937 in Milwaukee, WI to Stanley and Margaret P (Ciecholinski) Kulas. He attended St Anthony’s Elementary School until 1948 when his father died. His mother moved back to her hometown of Stevens Point with Greg and his younger brother Kenneth. Greg then went to St. Stan’s Elementary School and PJ Jacobs High School for his freshman year. His mother remarried in 1952 and they moved to Wisconsin Rapids. He attended Assumption High School and graduated as valedictorian of the first graduating class in 1955. He attended Central State College (now UWSP) and then transferred to Marquette University, earning Bachelor’s and Master’s degrees in Physics.
Greg met his future wife, Ruth Ann Stoeberl, his freshman year of college through their involvement in the Newman Center. Greg and Ruth were married January 2, 1960 at Sacred Heart Catholic Church in Hubbard Woods, IL. They recently celebrated their 61st wedding anniversary.
In August of 1961 they moved to Stevens Point where Greg began a 37 year career teaching Physics and later Astronomy. He was a member of many university committees throughout his career, and served as the director of the Observatory and Planetarium. At the time of his retirement in 1997, he was the senior (longest serving) member of the university faculty.
Greg and Ruth were blessed with 7 children – 6 sons and 1 daughter – between 1961 and 1971. Ruth was a stay at home mother, and with one income there was not a lot of extra money for frills. Family vacations were camping trips within Wisconsin. The big memorable family vacation was a two week camping trip out west, visiting several national parks.
Greg loved the outdoors and roaming through the woods. A favorite camping spot was Mondeaux Flowage in Taylor County. On a camping trip in 1986, he found 40 acres of woodland with a pond and a rickety old cabin in Taylor County and purchased it. A new cabin was built and he was adamant that it be rustic, and it was – no electricity and no indoor plumbing! He was fond of saying “we have running water, you just have to run out to the pump to get it”. Many weekends and deer seasons were spent at the cabin with his sons and grandchildren.
Greg and Ruth were founding members of Newman Parish where he served on the finance council, parish council and also was a reader and Eucharistic minister. While he missed the intimacy of the small Newman Parish, he totally supported the merger with St. Stan’s to become Holy Spirit Parish.
Greg joined the Bill Cook Chapter of the Izaak Walton League in the 1960’s. He was an active member until the last few years when his health declined. He served on the Board of Directors, the rifle range committee, worked at the annual Fisherees, and served two terms as president.
Greg was proud of his children and their accomplishments and the fact that they all graduated from Pacelli High School.
Greg is survived by his wife, Ruth, and their seven children and 18 grandchildren: Gregory and Kathy Kulas, Daniel, Michael, and Sarah, Iron Mountain, MI, Stephen and Pam Kulas, Noah, Maddie, and Lydia, Appleton, WI, Mary and Kevin Nordt, Emily, Sophia, Claire, Michael, and Katie, Wenatchee, WA, Michael and Anita Kulas, Leah and Paul, Madison, WI, Christopher and Nicole Kulas, Andrew, Jack, and Sam, Flower Mound, TX, David Kulas, Stevens Point, WI, and Thomas and Donna Kulas, Jacob and Kaleigh, Stow, MA. He is further survived by his two brothers Kenneth Kulas, Stevens Point, and Ric (Lorry) Walters, Plover, and two nephews Kendric (Maria) Walters, and their daughter Miri, Plover, and Ben (Ali) Walters, West Allis, WI, and one sister-in-law Susan Stoeberl, Stevens Point.
He was preceded in death by his maternal and paternal grandparents, and his parents Stanley and Margaret Kulas.
The family wishes to express their thanks and gratitude to the staff at Brookdale Assisted Living and Heartland Hospice for their kind and compassionate care of Greg.
Due to COVID restrictions, a private family Memorial Mass was celebrated at Holy Spirit Parish, followed by burial at Guardian Angel Cemetery.
In lieu of flowers, donations may be made to Holy Spirit Parish, Operation Bootstrap, or Pacelli High School.
The funeral mass may be livestreamed at holyspiritstevenspoint.org. at 11:00 AM on Monday January 18, 2021
Read Less

We encourage you to share your most beloved memories of Gregory here, so that the family and other loved ones can always see it. You can upload cherished photographs, or share your favorite stories, and can even comment on those shared by others.

Your Friends at Verso sent flowers to the family of Gregory S. Kulas Sr.
Show you care by sending flowers

Posted Feb 01, 2021 at 05:11pm
Sincere condolences to Ruth and the family on Greg's passing. He was a good man, a good colleague at UWSP, and a good fellow parishioner at Newman and Holy Spirit. As you mourn his loss you will no doubt celebrate his well-lived life. With warm regards, Bob and Molly Wolensky
Comment Share
Share via:
S

Posted Jan 21, 2021 at 06:34pm
Mrs. Kulas, Chris, and the rest of the Kulas family,
I am very sorry for your loss. May Gregory Kulas Sr. rest in peace.
Shane Drefcinski
Platteville, Wisconsin
Comment Share
Share via:
KM

Posted Jan 21, 2021 at 02:09pm
I was so sorry to see a name I recognized in the paper. I have thought about him many times over the years. I also had an astronomy class with Mr. Kulas. I still look up to the sky and see what stars I can pick out....all thanks to him. I hope he knew how much we loved and appreciated him. He was a teacher that did his best to help us...even though we probably thought we knew it all. Now he is one of the stars. I will be looking for him.
Comment Share
Share via:
SD

Posted Jan 21, 2021 at 11:29am
Dear Ruth, and family,
So sorry to hear of the loss of your husband, father and grandfather, Greg. He was a good man. I knew him through the university science dept. when he was my adviser. He helped me get my classes and established a major and minor for me when I was having confusion about what classes to take. I had a couple of your sons in class at Emerson School. What a nice family. He will be missed I'm sure. May you find peace and joy in knowing that he is in his heavenly home.
Comment Share
Share via:
YV

Your Friends at Verso

Your Friends at Verso purchased flowers for the family of Gregory Kulas. Send Flowers 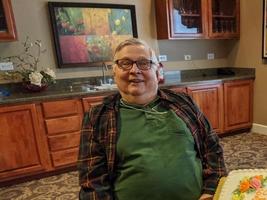