To share your memory on the wall of Robert Schmitz, sign in using one of the following options:

His employment, after being honorably discharged, began at a Richland Center Creamery as a Field Man inspecting farms. His marriage to Beverly (Bev) Jones took place on August 23, 1952 and they enjoyed 68 years of marriage.

In 1960 they purchased an A & W drive-in in Stevens Point which they operated for 10 years. In 1963, Bob was hired as the Health Inspector for the City of Stevens Point which expanded into the entire area of Portage County. After 25 years of service he retired as the Director of Environmental Health and his primary concern was the quality and regulation of the ground water protection.

Bob was a former commander of the VFW Post 2267 in Richland Center, was involved with Boy Scouts as an assistant Scout Master for troop 297 and was a charter member of the evening Lions Club. He was a former president of the Izaak Walton League and announced the door prize winners at the Fishery for 30 years.

Bob enjoyed golf, camping with the Drifters club and fishing at Clear Lake. He appreciated the Great Outdoors and loved watching the Packers/Badgers play football.

He was honored to attend the first Honor Flight to Washington DC.

It broke our hearts to lose you, you did not go alone, for part of us went with you, the day God called you Home. You left us peaceful memories, your love is still our guide. And though we cannot see you, you will always be in our hearts and at our sides.

Visitation will be at Shuda Funeral Home, 3200 Stanley St. Stevens Point from 4-7 PM on Friday April 30th and a Mass of Christian Burial followed by burial with military honors at St Killians, Bear Valley on Saturday May 1, 2021 at 1pm.

Posted Jun 09, 2021 at 09:01am
So sorry to hear of the loss of such a kind and caring man. I knew Bob through the Bill Cook Chapter of the Izaak Walton League. Bob always made sure to speak kindly and encouragingly to the "future" of the League and this land that we inhabit. He was a very wise man and I will always hold a place in my heart for his memory. Peace to the family.
Comment Share
Share via:
HS

Posted Apr 29, 2021 at 11:58am
Our very deepest sympathy and condolences to Bev and all the family. It has always been so nice knowing Bob (and Bev) ever since the days of the A & W. John & Duong Schmidt, Stevens Point.
Comment Share
Share via:
HS

Flowers were purchased for the family of Robert Schmitz. Send Flowers 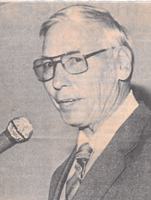