To share your memory on the wall of Feliksa Kosiec , sign in using one of the following options:

She was preceded in death by her parents Jan and Maria, her husband of 59 years Leon, two brothers Fred and Joseph, and a sister-in-law Helen.

A Mass of Christian burial will be held on Friday April 30, 2021 at 10:00 at Queen of All Saints Basilica in Chicago, IL; another Mass to be held on Monday, May 3, 2021 at 10:00 at St Adalbert Church in Rosholt with Rev. Thomas Nirappel officiating, followed by burial in the parish cemetery.

We encourage you to share your most beloved memories of Feliksa here, so that the family and other loved ones can always see it. You can upload cherished photographs, or share your favorite stories, and can even comment on those shared by others.

Posted Apr 30, 2021 at 01:10pm
We are so sorry for your loss. Thinking of you and your family during this difficult time. 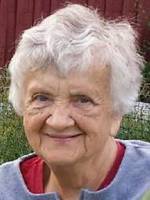